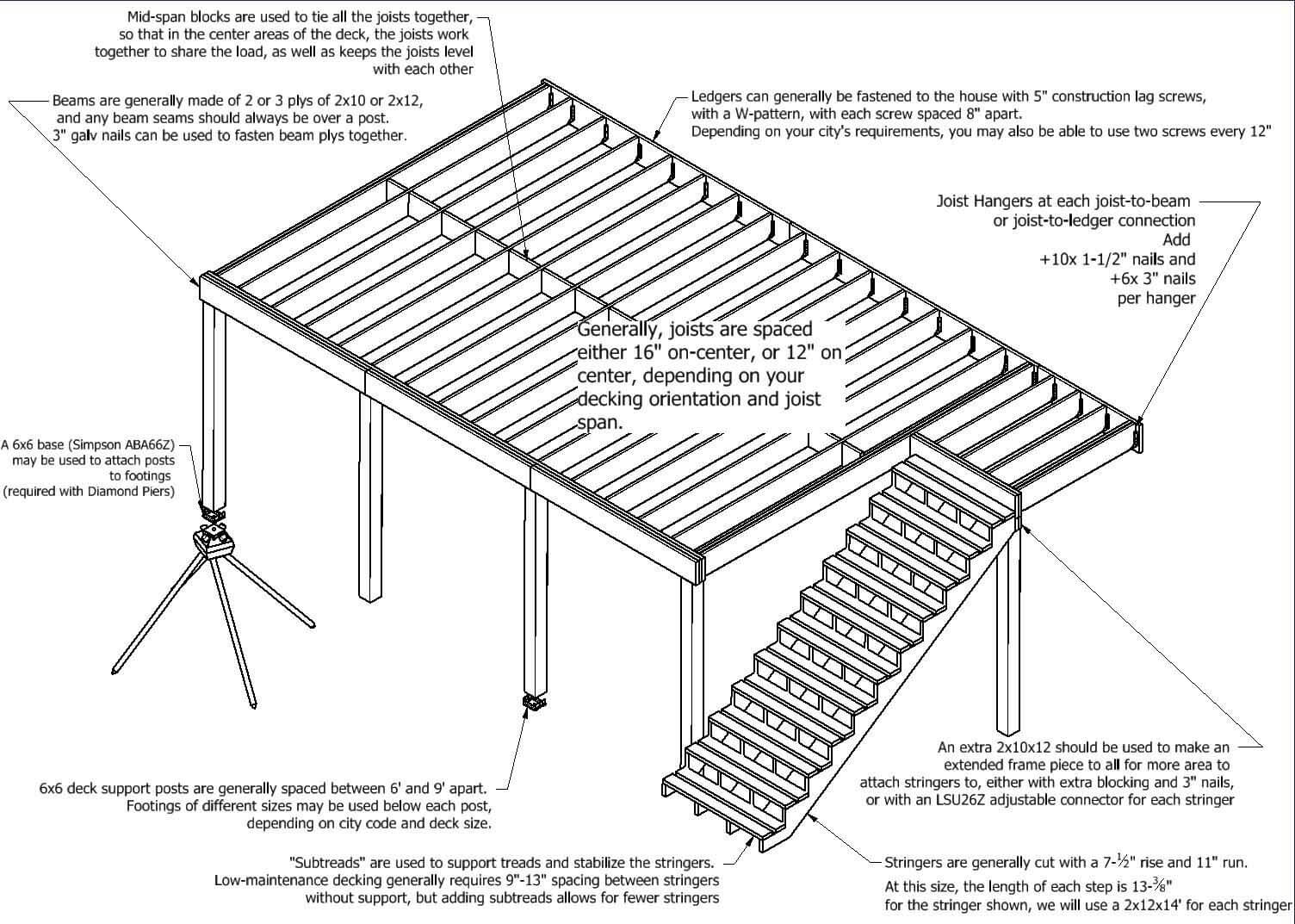 Frame packs with our recommended frame setup can be be added to your cart from the links below.

Make sure you have no framing items in your cart, and you can click the links below to add frame parts to your shopping cart.

NOTE: framing requirements vary city-to-city, and what we include in our packages may not be all the same parts and systems required to meet your city's code

Ledger flashing is laid between siding and sheathing, if possible, to allow any water that drips off the siding to flow over the ledger, and not behind it.

Flashing tape is used to adhere and seal the flashing to the house, and any other areas where a surface or seam should be waterproofed.

2x12 treated lumber is often used on ledgers, because it extends down far enough to allow you to fasten the ledger to your wall plate inside the house.

Fasteners for attaching ledger to house wall (generally a 5" or 6" "LedgerLok" or construction lag screw) :

Joists on medium to large sized decks are often 2x10 material, because of the distance they can span.

Joists are usually spaced 16" on-center, which is the standard joist spacing for most low-maintenance decking manufacturers, when running the decking perpendicular to the joists. When decking is run at a 45 degree angle to the joists, a 12" on-center spacing is usually needed to meet manufacturer's specifications.

You can also select angle hangers on this page, if you have a clipped or 45 degree beam/ledger section.

Green Bay Decking's DuxxBak water-shedding decking and Azek's MAX decking lines are a few exceptions to this rule, they will each span 24" on-center, when run perpendicular to joists.

Joist hangers are used to connect joists to either a ledger or flush beam. They are fastened first to the ledger/beam with 1-1/2" galvanized nails, and then 3" nails are driven through the side of the hanger at an angle, so that they go through the joist and into the ledger.

When installing a flush beam (a beam that is even with the level of the joists) you can use the aforementioned joist hangers and nails to fasten them.

When installing a dropped beam as your supporting beam beneath the ledgers, you would use either of the "hurricane ties" shown below to keep your joists vertical and connected to the beam. These should be connected with 1-1/2" or 3" nails, depending on the lumber size.

2x10 or 2x12 wood is a common size for beams, generally being two or three plys/layers. Size and quantities will depend on the span charts used in your area, how far apart your posts are, the length of your joists, and the overall load on the beam.

Engineered beams are often used when you want to eliminate posts, or span a longer distance.

If you plan on mounting your engineered beam to a post or other vertical surface, there are specific hangers and fasteners for the higher capacity beams.

When attaching a post to a beam, options vary based on beam style

When installing a dropped beam, you can use the hardware below, which is adjustable to whatever beam size you have, and fastened with either 1-1/2" or 3" nails

When installing a flush beam, you will generally need an alternative connector to connect the beam to your posts, because joists and joist hangers are often in the way.

2x10 or 2x12 wood is a common size for beams, generally being two or three plys/layers. Size and quantities will depend on the span charts used in your area, how far apart your posts are, the length of your joists, and the overall load on the beam.